At the risk of making this the first and only blog dedicated to TUCK! sez criticism, how could I pass up his latest gem? It might be his finest achievement to date. 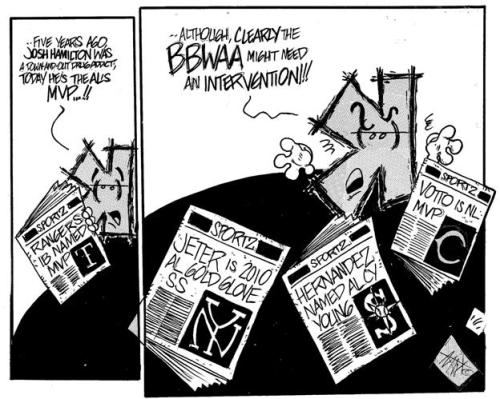 And I think the backwards K lives on Asteroid 331.

SABR love arguing and they love the internet. So arguing on the internet comes naturally. You can find stupid arguments all over the comments of The Book, Baseball Prospectus, BBTF, and a bunch of crappy SB Nation blogs. But you couldn’t, until yesterday, on The Hardball Times. Before then, all you’d see were the occasional person calling out Tuck for being an idiot.

It took an astonishingly-bad article, but look for yourself–a genuine SABR fight. Here’s the play-by-play.

Since then, Brad Johnson hasn’t shown his face. He must be ashamed. Mark, for his part, has been proudly trumpeting his victory and taking on any new comers, to the tune of 9 posts and 1,741 words in the last 24 hours.

I don’t have the patience to write an introduction for this, since any SABR worth his slide rule knows all about the horrible comic TUCK! sez that appears regularly on Hardball Times and also knows any moment spent thinking about it is a waste of time. Tuck’s artwork is terrible, his stories make no sense, and his jokes are so bad they actually might be anti-comedy.

The worst of it might be Tuck’s sheer laziness. Who else would post the exact same comic six times this year only changing the speech bubbles? If you don’t believe me, here’s the complete listing of what I call  the “Dragon Ball Z Guy Reads the Paper While Watching TV and after the TV Says Something Stupid and Not Funny, He Shoots a Knowing, World-Weary Look to the Reader, also the Headline on the Paper Changes to an Even Worse Joke than the one the TV Made” series.

There’s almost no difference from one edition to the next. The biggest change is when Dragon Ball Z Guy’s cigar-smoking dog, Si-Si, first appears on May 14, 2009. Oh and the guy’s hat appears to say “FAN·O,” presumably because he’s a sports fan. Very clever. Anyway, that’s the only change in format between 2007 and now. This is the kind of hard-hitting research you’ll only see at Praiseball Bospectus.

Beyond the stupidity of the jokes or even the stupidity of the whole setup and payoff, is the stupidity of Tuck himself. I don’t think he ever bothered to save a template of the comic, even though he’s reused it nearly two dozen times now. He just scans in a copy of a copy of a copy each time. Comparing the older comics with the more recent, the quality and pixelization definitely has gotten worse over the years. Eventually, we’ll be reading a gray box with two speech bubbles. I don’t know if gray boxes can give withering looks, though.

In the end, this won’t change anyone’s opinion on TUCK! sez. It was total crap to begin with, so what difference does it make if he starts copying himself? Excuse me while I sulk for having spent an hour on this. Next time, though, I’ll give Tuck the Tangotiger treatment, as I investigate the “awards” he’s won.

Update: I don’t why I didn’t do this before. Enjoy this slideshow of the comics. It makes it especially easy to tell that Tuck rescans the comic each time, as the orientation and size never stays the same.

This site is a poor imitation of one great blog already, so I’ll refrain from explaining today’s extremely stupid TUCK! sez comic on the Hardball Times, out of respect to Joe Mathlete. Nevertheless, I can’t comprehend why Tuck would suggest that Nolan Ryan or anyone involved with the Rangers auction at all wasn’t aware of the team’s debt obligations. Does Tuck really think he’s the first person to realize that the new owners will have to take care of that debt?

Tuck consistently produces the worst comics I’ve ever seen, but in terms of sheer stupidity of concept–not to mention execution–this one is in a class of its own.

I’ll indulge myself and touch on execution briefly. These are my issues: (1) Is it actually funnier to say “US Bankruptcy Court -n- Auction House” [sic] than “US Bankruptcy Court”? (2) Why is the American judge wearing a judge’s wig? (3) Does the empty speech bubble represent that Ryan is lost for words or did Tuck just forget to fill that one in? (4) How is the judge’s disembodied right arm coming from a mystery curl that isn’t attached the rest of the wig? (5) Is Judge Nelms’s left hand really just a giant thumb? (6) And why is he so evil?